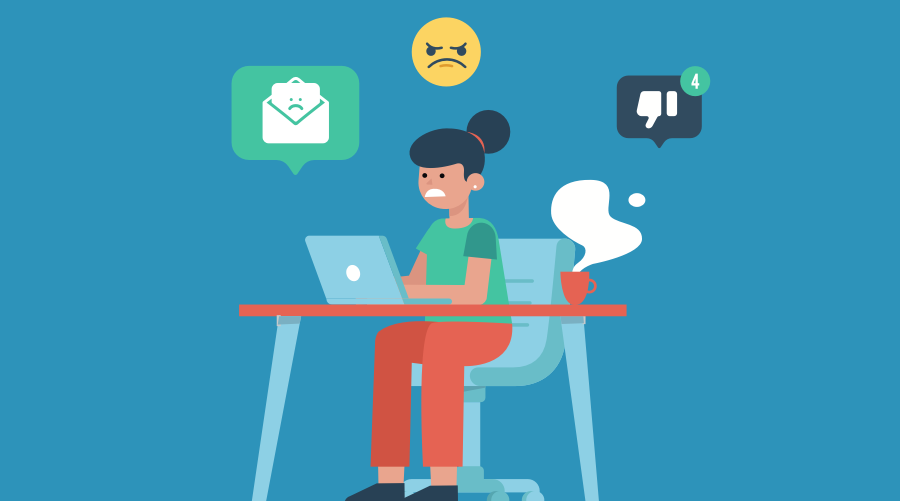 The internet gives us access to many media outlets. It keeps us informed on the news, weather, fashion, drama, and politics. It allows us to share information, advice, tips, and how to do things. But it can be equally prone to harboring unhelpful, hurtful, and damaging content.  Many media outlets such as YouTube, Instagram, and Facebook, which invite user commenting, are at risk for containing such content.

It is often said that “We are our own worst critics.” That is to say, no one is more aware of our flaws than ourselves. Yet, it is nearly impossible to go significant stretches of time without someone else pointing those things out for us. When it comes to social media platforms in which users upload original content, we are prone to being critiqued and criticized by countless others even more frequently. Far too often, a great deal of comments can go beyond constructive criticism and are sadly posted with direct intent to discourage, hurt, or insult someone. Such comments are fondly referred to online as “hate comments” and fall into the Cyberbullying category.

Often this is someone the commenter doesn’t know personally, but instead is passing a judgement based on observation of, for example, a single Instagram photo or YouTube video. When a video or picture is posted to a public account it leaves it open to being over analyzed and critiqued. Someone can play a video repeatedly or rewind sections, and on most media platforms zoom into photos. This exposes a person perhaps in a way they did not intend, such as an unflattering facial expression captured when a video is on pause, or small flaws zoomed into on a photo. When something previously thought to be minor and unnoticeable, like a mole or scar, is over analyzed and frequently critiqued, it can lead to over insecurity of something not before thought as problematic and has potential to disrupt overall body image or confidence.

One of the most common attributes for the intensity of online bullying is that it takes essentially no courage to post a comment anonymously versus walking up to someone and saying it to their face. There are many theories why online bullying can be equally demoralizing as encounters in person.  However, on a psychological level, online bullying may even take precedence over traditional bullying for several reasons. In a recent study from the University of Iowa called “Achilles’ Ear? Inferior Human Short-Term and Recognition Memory in the Auditory Modality” by James Bigelow and Amy Poremba it discusses the ways in which subjects respond and remember auditory compared to visual (and tactile) stimuli.

In the study, they found that the subject’s memory accuracy for auditory stimuli to fall significantly below that of visual stimuli. Therefore, what the study implies is that people often remember better what they see, rather than what they hear. With this knowledge, it is understandable how this form of bullying can have long term effects, comparable even to hurtful in person encounters. Unfortunately, there have been many cases attributed to the increase in the use of social media sites in which constant negative feedback has perhaps antagonized an individual to commit suicide.

Yet another notable fact regarding online bullying is the large variance in the age of users among nearly all media platforms. Thus, there can easily be a bias when it comes to much younger people commenting on an older person’s content, or vice versa. It is undoubtedly helpful that for users intending to post discouraging or offensive comments that it is extremely easy to remain anonymous. It is also well known that it is not uncommon for someone to pose as a person, and or an age they are not, and make hurtful comments with the receiver believing it is a peer. Many younger individuals today especially are pressed with unrealistic expectations perpetuated by social media and constantly compare themselves to other peers. As a result, they can both desperately strive for such unrealistic standards, as well as learn to critique others for lack thereof.

It becomes increasingly evident that online bullying is not only no better than the real thing, but it is becoming the standard form of bullying. It not only empowers those that are brave enough to make hurtful comments in person, but those that were once too cowardice to do so. Because of the rise in use of mobile devices such as cellphones and tablets, easy access and frequency of exposure alone is bound to increase the likeliness of receiving and remembering negative comments, that in turn can affect one’s self esteem or self-worth.

It must also be taken into consideration that the age in which someone begins having a social media presence can affect how much damage online bullying can do over the course of their exposure. For example, if a ten-year-old joins a social media site, with constant exposure to negative comments related to what they post, it may strongly affect how they view themselves by the time they are a young adult. If one takes into consideration these observations, it then becomes clear: Online bullying is no better than the real one no matter what reasons of cyberbullying are.

This essay is written by the student of the Valencia College in Orlando, Florida.

Get Your Own Unique Essay!
Check out our reviews of the top writing services: Wow Essays, We Papers, Paper Help and My Admissions Essay
← Have Swipe Left or Right Dating Apps Killed Romance?
What Is the Right Way to Implement Sex Ed In Schools? →
Oh-dear!
Sorry, the access for this country is denied.